The 2010 Letter to President Obama.

I am a researcher of the neo-Confederate movement and one of the editors of “Neo-Confederacy: A Critical Introduction” (Univ. of Texas Press, 2008). Neo-Confederacy is a movement that has a broad spectrum of prejudices against African Americans, Unitarians, Muslims, Hispanics, Gays & Lesbians and others. It opposes civil rights. It supports the subordination of women. Beyond that it is against the very ideas that are the foundation of a democratic society; is hostile to egalitarianism; and, advocates a hierarchical society which they call “ordered liberty” which is largely the liberty to order others around.

Unfortunately, to date the Office of the Presidency has actively enabled neo-Confederacy. Besides sending a wreath to a monument of neo-Confederate ideology in Arlington Memorial Park, presidents have attended parties celebrating the birthday of Robert E. Lee, thus normalizing the Confederacy, and former president Bill Clinton wrote three letters of congratulations to the United Daughters of the Confederacy undermining former Illinois U.S. Senator Carol Moseley-Braun’s historic 1993 victory over the UDC and Lost Cause nostalgia.[1]

I ask you to end the federal government’s support and enablement of neo-Confederacy starting by not sending a wreath to the Arlington Confederate monument on Memorial Day or any other day this year or years to come.

Rather than celebrating the Confederacy, the United States of America needs instead a national conversation on the Confederacy, the Civil War, the overthrow of Reconstruction and Neo-Confederacy. With the approach of the Sesquicentennial of the start of The Civil War, 2010 would be an ideal time to begin such a discussion to acknowledge the historical truth about these issues. With a false understanding of the historical past we poison the future. Or as the great W.E.B. Du Bois explained angrily in regards to the upcoming Civil War Centennial celebrations in 1960:

"Thus we train generations of men who do not know the past, or believe a false picture of the past, to have no trustworthy guide for living and to stumble doggedly on, through mistake after mistake, to fatal ends. Our history becomes “lies agreed upon” and stark ignorance guides our future.[2] "

The neo-Confederate organization the Sons of Confederate Veterans (SCV) is enabled by the federal government in the following ways:

* They are allowed participation in the Combined Federal Campaign as a recognized charity.

* The SCV is permitted to host events for the United States Army.

* The SCV is allowed to get involved with the Junior Reserve Officer Training Corps (JROTC) programs in the high schools.

One of the more notable means whereby the neo-Confederate movement is supported is the designation of the SCV as an eligible charity for the Combined Federal Campaign (CFC) since 2003.[3] As you know the CFC is the rough equivalent of the United Way for federal government employees. Through the CFC the SCV is enabled to raise funds from federal employees.

Involvement in the activities of the United States Army is shown in a 2006 issue of the Confederate Veteran, an official publication of the SCV, which has the following photo caption referring to an activity of a local SCV camp:

"The Colonel James J. Searcy Camp 1923, Columbia, MO, hosted a visit by the US. Army Staff Ride Class to the Centralia, MO, Battlefield and massacre site in connection with their class instruction. More than 40 active NCO members participated. They were all Iraq and Afghanistan veterans."

Above the caption you can see the officers, many of them African American, standing around a Confederate monument with the Confederate battle flag marked on it.[4] Hence, an American that enlists in the U.S. Army might end up attending a neo-Confederate event organized by the SCV. The SCV’s prestige is enhanced by its status as a host of the US Army, the SCV gets to be involved in the class instruction of Army officers, and the SCV is thereby legitimatized with US Army officers.

The SCV seeks to be involved in the Junior Reserve Officer’s Training Corps (JROTC). In the Nov./Dec. 2009 issue of Confederate Veterans the SCV announces in an article that it is going to expand the awarding of the South Carolina Division SCV’s H.L. Hunley JROTC award nation wide so as to reach, as Program Chairman Trip Wilson explains, “…500,000 cadets serving in 3,500 JROTC units…” The purpose of this award is to advance the goals of the SCV as Chairman Wilson explains:

"If each year we are able to recognize 500 to 1,000 cadets nationwide and get Sons of Confederate Veterans’ compatriots into high schools presenting the awards, then there is unlimited potential the good it can do in educating our young people and changing the perception of them and their parents have of our organization."[5]

The SCV does have an educational foundation, the Foundation for the Preservation of American Culture, which published a magazine, Southern Mercury, from 2003 to 2008, which ceased publication due to the lack of funds. From this magazine we can assess what type of “educating” and “instruction” the SCV might attempt and see what CFC contributions would help fund.

In an article in a 2003 issue of the Southern Mercury, SCV member Frank Conner argued that the modern Civil Rights movement was an attack on the South. He also asserted that African Americans have lower IQs than whites and that this fact was covered up by a conspiracy of liberals. In a section of the article titled, “The Liberals Create a False Public Image of the Blacks,” Conner wrote:

"Early in the 20th century, the liberals took control of the humanities departments in the colleges and universities of America. Previously, anthropologists had routinely recorded the notable differences in IQ among the races; but at Columbia, a liberal cultural anthropologist named Franz Boas now changed all of that. He decreed that there were no differences in IQ among the races, and the only biological differences between the blacks and whites were of superficial nature. The liberals swiftly made it academically suicidal to challenge Boas’ flat assertion. … The liberals were creating a false image of the blacks in America as a highly competent people who were being held back by the prejudiced white Southerners."

In another section of this same article titled, “The Liberals Destroy the Old South in the Name of Black Civil Rights,” Conner asserts that the white South was unfairly vilified by the media during the Civil Rights Era resulting in “the patently unconstitutional Civil Rights Act of 1964 and Voting Rights Act of 1965” being passed by which he asserts, “The Old South was destroyed, and its belief system and way of life were discredited outside the South.”[6]

Conner’s article is a summary of a section from his book, The South Under Siege (2002). In this section in the book, however, Conner focuses his attacks on Jews, pointing out that Boas was Jewish, and tells his readers that the Civil Rights movement was a Jewish plot against the South. He concludes that “Northern Jewish intellectuals/activists” are the “deadliest” enemies of the South.[7] The book is reviewed in the same issue as Conner’s article with reviewer Ann Rives Zappa recommending it, writing, “The South Under Siege is a masterful volume of work painstakingly researched by author Frank Conner.”[8]

This article by Frank Conner isn’t one outlandish essay that accidentally got published in the Southern Mercury. Rather, it is broadly representative of the contents of the issues of this magazine. Conner’s four other articles in the magazine, including the cover article for the first issue, along with the contributions of other authors, the issues of Southern Mercury form a collection of similar hysterical and extremist articles.

Another example of the SCV’s extremism is an article in a 2008 issue titled, “Republican Party: Red From the Start,” by Alan Stang. This essay argues that the Republican Party was a Marxist conspiracy from its inception. Stang writes:

"In retrospect, it appears because nothing so atrocious had ever happened here, Lee and Jackson did not fully comprehend what they were fighting. Had this really been a “Civil War,” rather than a secession, they would and could have easily seized Washington after Manassas and hanged our first Communist President and the other war criminals."[9]

Another activity of the Southern Mercury, Confederate Veteran and the SCV online store is the promotion and sale of books that defend or whitewash slavery. The very first issue of Southern Mercury in 2003 has a review praising the John C. Perry’s book, "Myths & Realities of American Slavery: The True History of Slavery in America" (2002) in which the enormity of the whipping of slaves is trivialized by book author John C. Perry, who writes:

"Even in my youth, in the middle of the twentieth century, I was whipped, by a switching from my mother and a belt from my father. The old adage, 'spare the rod and spoil the child,' was taken seriously in my home as I was growing up."[10]

The reviewer, Ann Rives Zappa, writes “In this masterful treatment of the subject, the author uses historical data, personal accounts, and statistics to establish facts and debunk myths.”

A 2003 issue of Southern Mercury had a short story titled, “Choosing Slavery in Mississippi Over Freedom in Pennsylvania,” about a slave who preferred to be a slave. Later in the same issue a book reviewer recommends yet another pro-slavery book, "The Myths of American Slavery" by Walter D. Kennedy (2003). The book has a whole chapter titled “Abolitionism Versus Christianity,” in which the abolitionists are held to be anti-Christian heretics and in which Kennedy condemns the Southern Baptist apology for supporting slavery, the Racial Reconciliation Resolution, at their 1995 annual convention, saying “The resolution is nothing more than liberal double-speak for an act of cultural genocide against the South.”[11]

This includes one book titled, “Antebellum Slavery: An Orthodox Christian View,” (2008) by Gary Lee Roper which claims an orthodox Christian defense of slavery. The foreword of the book explains that Antebellum slavery was God’s providential plan to uplift Africans. This book was also promoted by the SCV’s Chaplain Corps in their publication, Chaplain’s Corps Chronicles of the Sons of Confederate Veterans, in which reviewer Michael Andrew Grissom tells the reader “THIS IS A MUST READ!” and “The book makes the point it is ludicrous to apologize (as several states have done recently) to a black population for legal slavery that occurred years ago when presently illegal slavery exists in at least 20 countries of the world including the USA.”[12] Further documentation of SCV extremism can be found on the internet site: http://arlingtonconfederatemonument.blogspot.com/.

In summary, the SCV promotes a neo-Confederate perspective that challenges American democratic practices, praises and sells extremist and racist books, and offers defenses of slavery. Consequently, in addition to ending the practice of sending a Presidential wreath to the Confederate memorial in Arlington Cemetery on Memorial Day, I ask you to revoke the SCV’s participation as a recognized charity in the Combined Federal Campaign, deny the SCV permission to host events for the United States Army, and prevent the SCV’s future involvement Junior Reserve Officer Training Corps (JROTC) programs in America’s high schools. 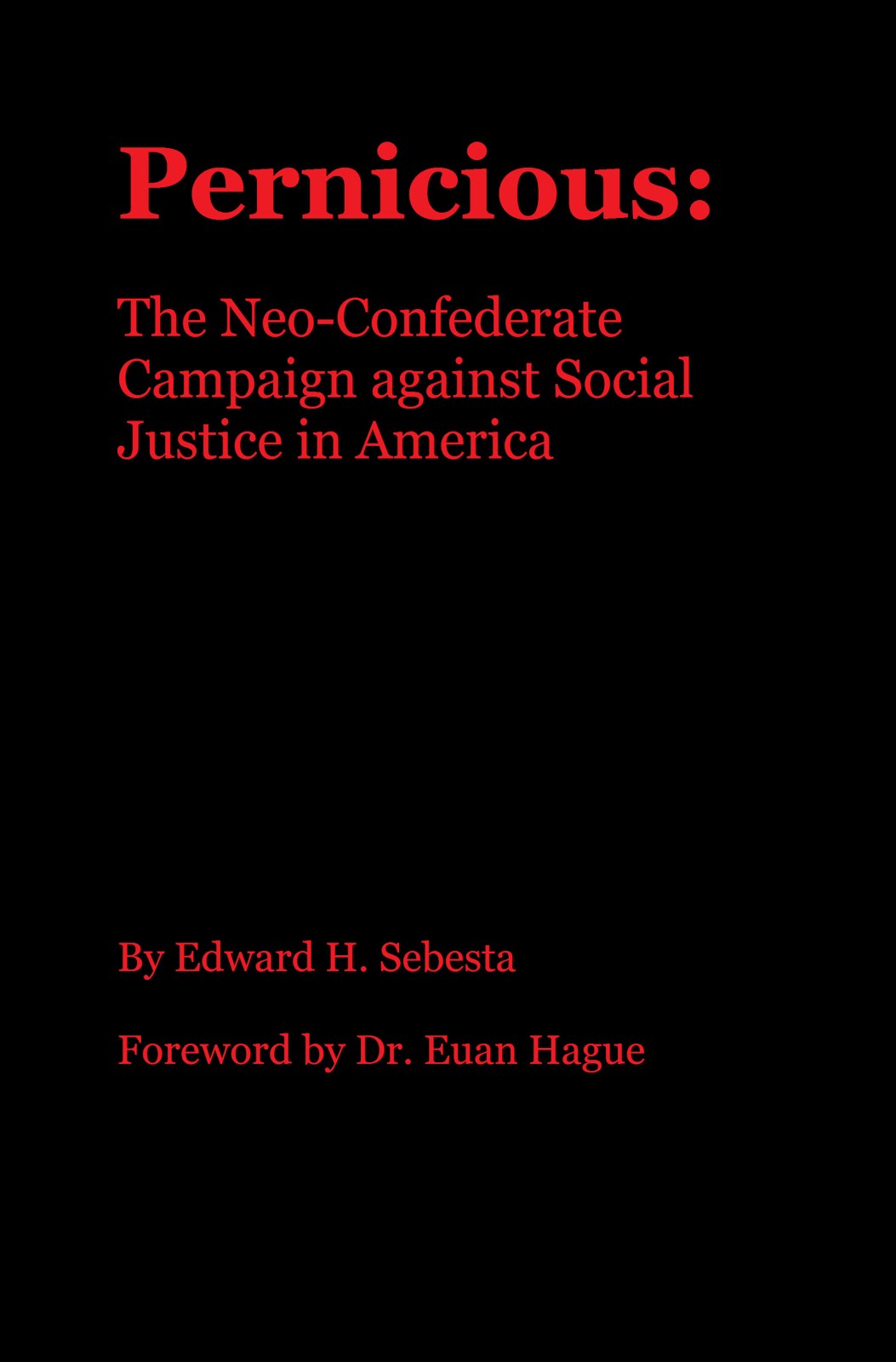